Published by: MRT
Published on: September 9, 2021
According to market researchers, low code is on the rise. At this year’s Mendix World, the Siemens subsidiary presented its plans for the use of low code in industry to enable more efficient production and to advance companies on the path to digitization. In this context spoke heise Developer with Johan den Haan, CTO of Mendix, about the current role of low code, its areas of application and relationship to artificial intelligence (AI) as well as future prognoses.

The innovations presented at Mendix World 2021 include specific clouds for the industrial and financial sectors: Mendix for Manufacturing Industries and Mendix for Financial Services with industry-specific building blocks such as APIs, workflows, templates and more. “In our opinion, fixed, prescriptive SaaS applications are a thing of the past,” said Mendix CEO Derek Roos in his keynote speech on the first day of the conference. The change to “digital first” requires highly personalized, adaptive applications.
CTO Johan den Haan started the second day of the conference with his technical keynote, in which, among other things, he presented the second main version of the Data Hub for low-code access to company data. Mendix presented the first version at its conference last year. Data Hub 2.0 is intended to further expand the capabilities of the platform, for example by expanding the possibilities for data cataloging, which concerns the filtering and use of large amounts of data from data lakes or data warehouses.

The second day of the conference did not leave out the topic of Artificial Intelligence (AI) either: The new Page Bot is intended to offer software developers recommendations for creating UI and UX and is based on anonymized data from Mendix users. So far, Mendix has already provided the Logic Bot and the Performance Bot. Also new are the Mendix Machine Learning (ML) Kit, which should enable the use of ML models via drag & drop, as well as Smart AppServices to support the digitization of business processes, such as the recording of invoices or receipts.
In an interview with Johan den Haan, Johan den Haan describes the area from no code to low code to classic development heise Developer as a complex spectrum – and the process does not stand still: “If we look at low code ten years ago, it had the same capabilities back then as no code today.” While no code is an option for so-called citizen developers without programming knowledge, the use of a low-code platform requires appropriate training and, if necessary, can be expanded by developers with additional code, up to a “full code” application.

However, one of the criticisms of low code described in the Technology Radar 2020 comes into play at this point: Development competence is required precisely to recognize when a project has exceeded the possibilities of low code.
Low-code applications in the industrial sector are aimed at Industry 4.0. The buzzword came up in Germany a decade ago, but the digitization of industrial production poses challenges for many companies: This is how they see themselves according to this year’s Bitkom study 66 percent of German companies are lagging behind or even left behind when it comes to Industry 4.0. The challenges include according to a Bitkom position paper lack of financial resources, data protection and IT security as well as a lack of skilled workers.
Low code comes into play at the last point: For example, engineers with valuable domain-specific knowledge can use low-code platforms to develop applications for different business areas. As Johan den Haan explains, low code offers companies a way to automate processes despite a small number of developers. After all, the shortage of skilled workers is currently acute and cannot be cushioned promptly by the increasing number of computer science students. 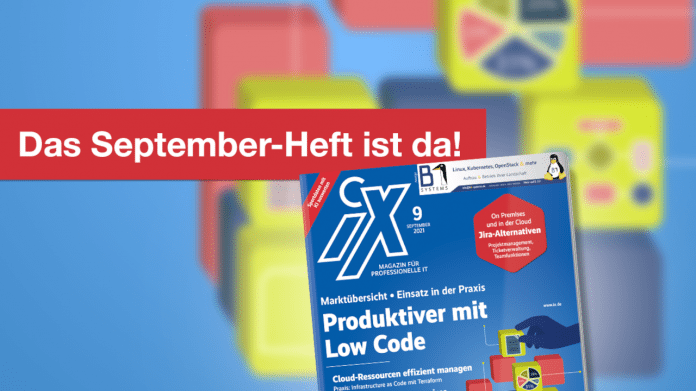 The use of artificial intelligence (AI) is also moving more into focus. According to Den Haan, the combination of low code and AI should not pose any additional difficulties with regard to the well-known black box problem of inexplicable AI algorithms. Although it is not a prerequisite that low-code users themselves have knowledge of data science and machine learning, appropriate developers behind the low-code applications are available as contacts.
The beginnings of low code go back several decades and can be found in RAD products (Rapid Application Development) as well as in model-driven software development (MDSD, Model Driven Software Development) in the 1990s. The principle of low code is to reduce the amount of code writing. In this way, software applications can be compiled by visually programming components using a graphical user interface. The success of the low-code principle is made clear by recent studies by the market research company Gartner: At the beginning of the year, it predicted growth in the low-code area of ​​13.8 billion US dollars for 2021 and based the forecast on the use of Software as a Service (SaaS) and progressive automation. In 2019, the value was 9.2 billion US dollars.
In ten years, says Johan den Haan, “we will definitely have reached the next step in automation, that AI supports us in software development. And that can go quite far, so that it not only offers code suggestions, but the complete creation of one Software done. ” The CTO also suspects that the performance of a junior developer will reach the level of a senior developer during this period due to the AI ​​support.
Finally, it remains to be said that, according to Den Haan, the use of low-code platforms by no means makes developers superfluous. On the contrary, in the industrial sector – thanks to the operation of the low-code applications by engineers – the limited number of developers leaves more time to concentrate on more complex development tasks in the company, which is definitely in their interest. And, of course, there are also developers behind low-code applications themselves, at Mendix there are currently 450.